If 2012 was a year to remember for ASIA, with the release of the acclaimed studio album ‘XXX’ marking the band’s thirtieth anniversary, then 2013 is set to be another. John Wetton, Geoff Downes and Carl Palmer are delighted to announce that not only do they have an incredible talent in place to step into Steve Howe’s shoes, but also that their first international show with newcomer Sam Coulson will be a high profile performance at Sweden Rock 2013. Sam is a wonderful player, world-renowned amongst guitar virtuosos. Additionally, a new studio album, to be entitled ‘Valkyrie’, will be recorded for Frontiers Records during 2013 continuing the band’s relationship with the label.
John Wetton said, “ASIA is ready to take its next steps along this remarkable road. We cannot wait to perform again for the fans and also to unveil some of the new material, of which we are very proud”. Geoff Downes said, “We look forward to writing another chapter in Asia’s history”. Carl Palmer commented, “We’re all looking forward to the next decade of great ASIA music”. 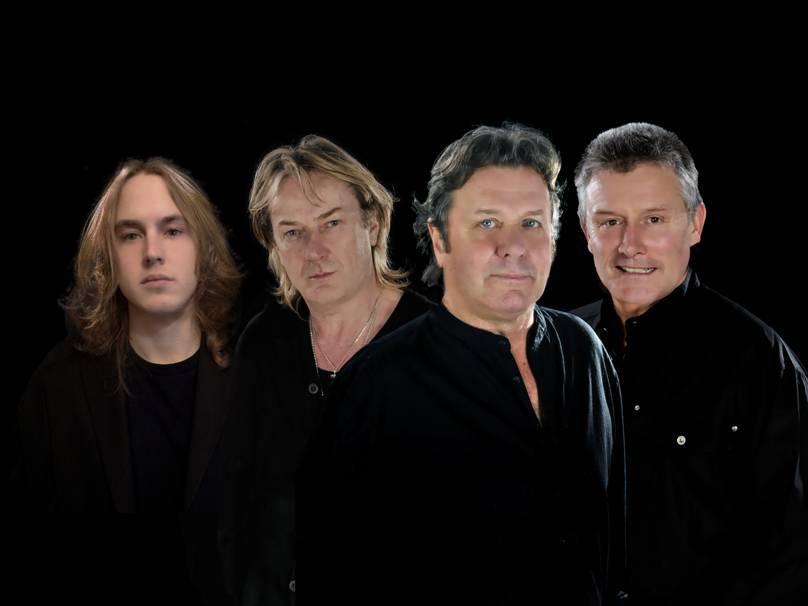 Sam Coulson, Geoff Downes, John Wetton and Carl Palmer
ASIA formed as a supergroup of stunning pedigrees, bringing together songwriter, lead vocalist and bassist John Wetton [King Crimson, UK], keyboardist Geoff Downes [Yes, The Buggles], drummer extraordinaire Carl Palmer [ELP] and Steve Howe [Yes]. Their self-titled debut album was the biggest selling album in the world in 1982 and monopolized the Number 1 slot in the Billboard charts for 9 weeks. The album is still in the top 3 Geffen sales of all time, with Guns ’n’ Roses and Whitesnake! With tracks like mega-hit ‘Heat Of The Moment’, ASIA helped to create the MTV phenomenon. The band’s work perfected the use of videos that encompassed stories and messages, examples being the work for ‘Wildest Dreams’, ‘Only Time Will Tell’, ‘The Smile Has Left Your Eyes’ and ‘Don’t Cry’. ‘Heat Of The Moment’ is still a radio fixture and has been in top TV and films including ‘40 Year Old Virgin’, ‘South Park’, ‘Cold Case’, ‘The Matador’ and countless others.
In 2006 the original band reunited for a tour of USA, which was followed by four world tours and several continental tours. The reunited band has played over 300 shows and released three new studio albums, three DVDs and a number of live albums. The track ‘An Extraordinary Life’, from 2008’s album ‘Phoenix’ was chosen as the theme music for America’s Got Talent. This is a band with plenty more to say.
With a new guitarist in place, Sweden Rock confirmed and more high profile live dates to come, plus a new album slated for release, the ASIA trajectory continues: onward and upwards!