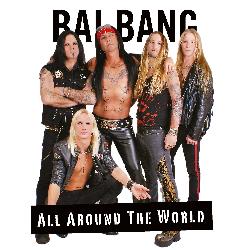 BAI BANG – one of the most powerful rock acts from Sweden – features four talented and dynamic rockers in the line-up: Diddi Kastenholt (vocals), Pelle Eliaz (Guitar), Joacim Sandin (bass), Jens Lundgren (guitar) and Johnny Benson (drums) Since the band has started in the late 80’s, BAI BANG have spent a lot of time together on their tours all over Europe, USA,  Canada, Japan – including the famous Whisky a Gogo and the Cat Club in Los Angeles twice each. The Swedes shared the stage with bands such as LA Guns, Thin Lizzy, Wishbone Ash, Ratt, Dio, Mötley Crüe,  Pretty Maids, Saxon, Axel Rudi Pell and played at festivals such as Sweden Rock, Wacken and Rocklahoma.

The album “Are You Ready” was released in 2009 and nominated for the best sleaze/glam album in at the Swedish Metal Awards and voted as “The Best all round party anthem album of the year” in the Australian magazine The Rockpit.

In 2011 the band released  their  seventh album in total “Livin My Dream”. This CD was recorded in Sunshine Explosion studios in Helsingborg, Sweden during the years  2010 & 2011. A video was shot for the track “Rock it”.

The  new  album “All Around the World”the bands 8th was recorded at Sunshine Explosion Studio. Bai Bang ¨has been working with Pontus Assarsson as producer this time too.Martin Kronlund did the mastering again.