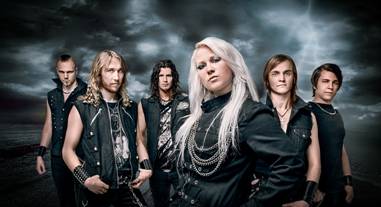 BATTLE BEAST – Finland’s finest in heavy metal – have hit the charts with their stunning second studio album »Battle Beast«! In their home country, the beasts have made a phenomenal #5, while in Germany, they’ve entered the official album charts at #82.
The band joyfully comments: “A lot of things have happened since we first released »Steel« in 2012, and we had absolutely no idea what to expect. So making it to the top 5 – with music like ours – is purely insane! The fact we’ve even started making a dent on the German charts shows that not everything has gone wrong for us after all! Thanks to everybody who’s purchased the album – we’ve proven that heavy metal is still alive and well.”

Get the album now on CD, black vinyl, white vinyl or as a digital iTunes download: http://smarturl.it/BattleBeastCD