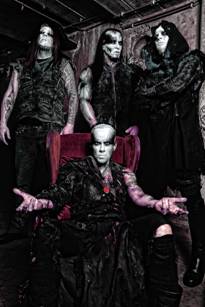 The release of Polish extreme metal masters BEHEMOTH’s upcoming tenth studio album »The Satanist« that has previously been announced for this fall has now been postponed to early 2014 and will be accompanied by an extensive headlining tour – further information including the exact dates to follow soon!

Until then, the only chance to catch BEHEMOTH live in Europe after their forthcoming show at Czech Brutal Assault Festival on August 10 will be their exclusive show at German “Metal Hammer Paradise” from November 15 to November 16. For further information, visit www.metal-hammer-paradise.de.

Regarding the title of the new album, front man Nergal recently stated: “It took us over two decades to come up with a title that…says it all. While our new songs artistically take surprisingly adventurous directions, our message stands steadfast—Proud and Radical. »The Satanist« stands for undying yearning for liberation and love for freedom in all aspects of life. Considering all our life experiences that often took dramatic curves I couldn’t think of more appropriate and fitting statement of who and where we are now.”