On the 23rd of March 2013, female fronted symphonic metal band Epica is celebrating their 10th anniversary with a special performance entitled Retrospect. Joining them on stage will be the 70-piece Extended Remenyi Ede Chamber Orchestra and the Choir of Miskolc National Theatre. This together with special effects and unexpected guests will make this the band’s most ambitious project ever.

Ever since EPICA announced this extraordinary event, fans from all over the world have been asking to bring this concept to their country. Others expressed their sadness of not being able to make it to the Netherlands and thus missing out on the opportunity to be part of what will be the greatest EPICA show.

For all those people out there who thought they would never get another chance to celebrate EPICA’s 10th anniversary, the band has partnered with LiveMusicStage who will broadcast the concert online, live and in HD quality! The high quality live Retrostream provides an exclusive, social concert experience with a front row view.

“I am looking very much forward to this show. Everything we have done and achieved in these last 10 years will come together on the 23rd of March. Playing with a big orchestra and choir brings our music even more alive, in fact that’s the way how it’s meant to be. Very rarely can we realize all of it and that makes it so special”, says Mark Jansen of Epica.

Tickets to watch the live stream at http://www.livemusicstage.com/epica will be available for 5 euro until the 7th of March. After this, tickets will cost 7 euro (or the equivalent in US Dollar). You can purchase tickets for the live stream through www.livemusicstage.com/epica. You can also order an exclusive stream bundle (consisting of a ticket for the stream, a Retrospect T-shirt and a Retrospect VIP laminate) through the bands webstore at: http://www.epicashop.com/shop/retrostream-ticket–t-shirt–limited-edition-laminete-p-255.html 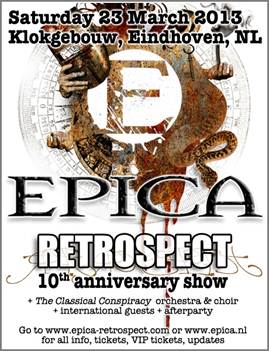