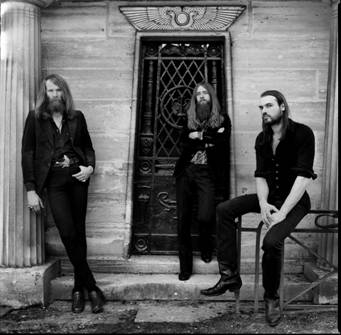 Berlin-based classic/psychedelic rockers KADAVAR have just announced the split with bass player Mammut. The band comments: “After almost three years of band history, Mammut left the band due to musical and personal reasons. We believe that this decision was for the good of us all and wish him only the best for his future.”

Already during the past weeks, Mammut hasn’t been part of KADAVAR’s extensive touring activities anymore, but has been replaced by a stand-in musician who also happens to be an old friend of the band and is now officially introduced as their new bassist – Simon Bouteloup: “For us, Simon Bouteloup was the only replacement imaginable all along. We’ve toured with his ex-band AQUA NEBULA OSCILLATOR in the past and recorded a split record with them. Afterwards, he accompanied our tours on a regular basis. In autumn of 2012 he moved from Paris to Berlin and joined THE OATH. We’re happy to have him on board as a permanent member now!”

And what about Simon’s future animal nick name? “After Mammut had been a reliable companion to Tiger and Wolf, Simon `the dragon´ will support us with his wings and fire from now on!”

Be sure to catch the renewed three-piece at one of their upcoming shows: