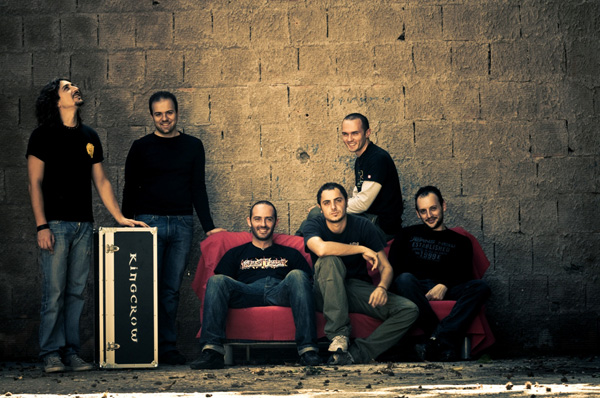 Italian progressive metal outfit KINGCROW today unveils a newly completed video for the song “Morning Rain,” the third single to be released from their recently released fifth album, In Crescendo.

Released on February 12th via Sensory Records, In Crescendo has been reaping acclaim from rock and metal critics worldwide, and exposing countless new fans throughout the scene to KINGCROW’s massive sounds. The vibrant visual depiction of “Morning Rain” — the most melodic and emotional track to be found on the nearly hour-long In Crescendo — was written by Devilnax and KINGCROW’s Diego Cafolla, and filmed and directed by Mauro Marani Studio and Devilnax.

The opening song on In Crescendo, “Right Before” is streaming at PureGrainAudio, and the second track, “This Ain’t Another Love Song,” is playing at Brave Words & Bloody Knuckles.

Following their glorious set at 2012’s ProgPower USA festival, KINGCROW recently confirmed their forthcoming return to North America this Spring, this time in support of In Crescendo. The trek will begin April 28th with a one-off in Atlanta, Georgia, before hooking up with Pain Of Salvation for the main tour. The tour will traverse through Virginia and Maryland before hitting the annual RosFest in Gettysburg, Pennsylvania alongside The Flower Kings, Shadow Gallery, Riverside and more. Following the festival the tour will hit New York City before heading into Canada for shows in Quebec City, Montreal and Toronto, then dropping back into the US for shows in Chicago and Minneapolis. Stay tuned as new tour updates are announced in the coming weeks. Check out a teaser for the tour and more HERE.

Having evolved from a mostly progressive metal direction, KINGCROW has increasingly expanded the scope of their sound to encompass elements of rock over recent years, nowadays culminating strong atmospheric components similar to Riverside, Porcupine Tree and Pink Floyd but also bearing a heavier, metallic semblance to Opeth and Dream Theater.

“…from start to finish, on In Crescendo, Kingcrow weaves an immensely entertaining tapestry of music, a fine merger of melodic heavier rock with its progressive rock and metal counterparts. 5/5” – Dangerdog Music Reviews

“…Kingcrow bring this album to a triumphant conclusion with so much great and complex at times music and as with the other seven songs the vocals are also very inviting. 4.5/5” – Sea Of Tranquility

“…a very fine mixture of modern progressive metal and mellow progressive rock, which is sure to please fans of both genres… 8/10” – My Global Mind

Review copies of In Crescendo and interviews with KINGCROW’s Diego Cafolla are available now!