LINGUA MORTIS ORCHESTRA – live debut on 70.000 Tons of Metal cruise, first details on upcoming album
End of January, the LINGUA MORTIS ORCHESTRA – founded by German heavy metallers RAGE as an orchestral side-project – made its live debut over the course of 2013’s 70.000 Tons of Metal cruise: On the high seas in the Caribbean, the 15-member band played two highly celebrated gigs in the packed “Chorus Line Theater” on board of the “Majesty Of The Seas” cruise ship. Enthusiastic feedback by both fans and the press provided the combo with another boost of motivation for the upcoming recordings of the debut album that are due in April under the musical direction of Victor Smolski. Right in time for several booked festival shows (on this year’s Wacken Open Air, among others), LINGUA MORTIS ORCHESTRA’s debut record is set for an early August release.
Victor Smolski – guitarist and head of the project – comments on the work progress: “Back from Florida’s heat to Germany’s iciness, but there can be no talk of feeling chilly – we’re boiling over with work in our studio! I’m already back in arranging and composing mode, while mountains of scores are piling up on my desk. I’m already fascinated by the new LINGUA MORTIS ORCHESTRA songs due to their multifacetedness: Rock-hard tracks, some of them even heavier than those of our latest RAGE record “21“, are contrasted with balladic melodies of sheer beauty. The first official LINGUA MORTIS ORCHESTRA album will be something very special for us, as we’ve never created anything like this before. You can look forward to a concept album with long tracks, sung by Peavy and enriched with female vocals as well as with exotic orchestra instruments. I’ll keep you posted!“
www.rage-on.de | www.facebook.com/officialrage | www.nuclearblast.de/rage 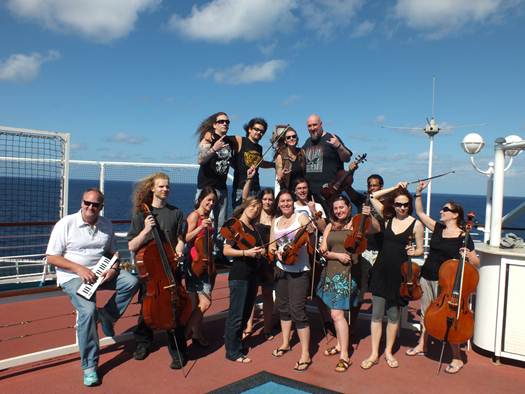