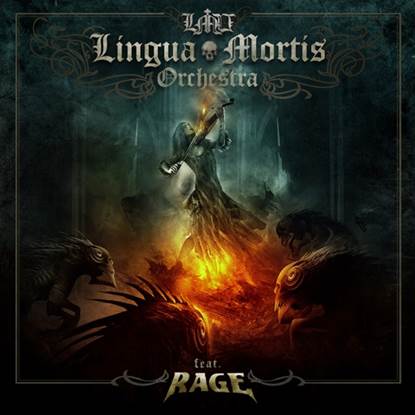 On Saturday, 2nd of August – apposite to their upcoming show at the Wacken Open Air on the next day – LINGUA MORTIS ORCHESTRA will release their new album, concisely entitled »LMO«.

During the past month, the three RAGE musicians Victor Smolski (guitar), Peavy Wagner (vocals and bass) and André Hilgers (drums) worked at full stretch to finish their opulent orchestral project that can be considered a continuation of 1996’s »Lingua Mortis« album – back then a true piece of pioneering work.

The entire album was composed by Victor Smolski who cooperated with two orchestras from Spain and Russia, enlarging the number of this mammoth project’s participants to more than 100. Together with long-term co-producer Charlie Bauerfeind (BLIND GUARDIAN, HAMMERFALL among others), Victor Smolski produced and mixed the record in “Twilight Hall Studio” Krefeld, Germany. The final mastering is to be done within the next days.

»LMO« follows an exciting concept on the burning of witches in Gelnhausen in 1599, written by vocalist Peavy Wagner and based on a true story. Apart from the three RAGE musicians, two female vocalists belong to LINGUA MORTIS ORCHESTRA’s regular cast: Jeannette Marchewka and soprano singer Dana Harnge. Guest vocals were contributed by Henning Basse (ex-METALLIUM), among others.

The tracklist of »LMO« reads as follows:

a) Convert The Pagans PT. 1

b) The Inquisition (instrumental)

The cover artwork was created by Felipe Machado Franco who’s also been responsible for the latest RAGE artwork of »21«. The band photos were shot by Pia Kintrup.

On past Saturday, May 4, the rough mix of »LMO« was presented to a group of international journalists. German ROCK IT MAGAZINE’s journalist Martin Stark describes the record as an “opulent metal opera, more orchestral than anything else, partly heavier than RAGE and melodic beyond my wildest dreams from end to end.” GUITAR editor Nico Ernst states: “Never before has the combination of band and orchestra worked that well.” METAL.DE writer Florian Schörg takes the thought further and judges: “The perfect symbiosis of two worlds sparkles with both fantastic melodies and heaviness. The gigantic spectrum of emotions can be considered the cream topping on this extraordinarily delicious sound cocktail.”

A studio trailer can be watched here: http://youtu.be/sypI7_iM6Xc

»LMO« will be out on August 2 via Nuclear Blast.
www.lingua-mortis-orchestra.de I https://www.facebook.com/Linguamortisorchestra