In Stores IN September on Frontiers Records

From new originals like “Knockdown Dragout” with Kid Rock, “Bad On Fords and Chevrolets,” with Ronnie Dunn, “All We Need Is An Island,” with Nancy Wilson, “Going Down” with Neal Schon, Michael Anthony and Chad Smith, and “Father Sun,” a duet with his son Aaron Hagar – to reimagined covers of classics like Bob Seger’s, “Ramblin’ Gamblin’ Man,” and Depeche Mode’s “Personal Jesus,” – Hagar has masterfully assembled an album that delves into rock, country, blues and pop. “Sammy Hagar and Friends” is Hagar’s first solo album since 2008.   Full details, including a complete artist list, cover art, tracklisting and presale information will be announced shortly.

The release of “Sammy Hagar and Friends” will follow on the heels of his “Four Decades of Rock” summer tour which kicks off July 26th in Tucson and wraps September 7th in his hometown of San Francisco.  The 14-city tour celebrates Hagar’s arsenal of hits from his career-spanning success as a solo artist, songwriter and frontman for Van Halen, Montrose and Chickenfoot.  The tour, which features Hagar and his band, The Wabos will also see influential bandmates from his career including Michael Anthony, Denny Carmassi, Bill Church and more joining him on select dates.  Hagar and his line up of guest stars will take fans on a hit-filled retrospective from the Red Rocker’s prolific career.  Fans can also expect some surprise “friends” to join Hagar on stage for a sneak peak of tracks from the new album. For a full list of tour dates, visit www.redrocker.com.

Sammy Hagar, also known as The Red Rocker, is a Grammy award-winning vocalist, guitarist, songwriter and musician, who in 2007 was inducted into the Rock and Roll Hall of Fame as a member of Van Halen.  From breaking into the industry with the seminal hard rock band Montrose to his multiplatinum solo career and his ride as the frontman of Van Halen, he’s set the tone for some of the greatest rock anthems ever written—with songs like “I Can’t Drive 55,” “Rock Candy,” “I’ll Fall in Love Again,” “There’s Only One Way to Rock,” “Your Love Is Driving Me Crazy,” “Finish What Ya Started”  “Right Now,” and “Why Can’t This Be Love.” Throughout his prolific 40-year-career, Hagar’s solo and group albums have globally amassed 25 Platinum certifications on sales surpassing 40 million. In 2009, he formed the supergroup Chickenfoot with bassist Michael Anthony (ex–Van Halen), guitarist Joe Satriani, and drummer Chad Smith (Red Hot Chili Peppers). The band’s self-titled debut album was certified gold and their subsequent tours were lauded by both fans and critics. In 2011, with the release of his critically acclaimed autobiography, “Red: My Uncensored Life In Rock,” he became a # 1 New York Times Best Selling Author. With his Cabo Wabo Tequila, Sammy’s Beach Bar Rum and succession of successful bar & restaurant brands, he’s evolved into an auspicious entrepreneur, pioneering the now popular celebrity spirit trend.   Raised in Fontana, CA, Hagar’s hardscrabble upbringing instilled in him an unstoppable work ethic that’s been the driving force behind his rise to the top – and continues to fuel his dedication as a philanthropist.

Frontiers Records was founded back in 1996 in Napoli, Italy by Serafino Perugino. In just a few years the label has become home to highly respected and influential rock artists such as Whitesnake, Yes, Journey, Def Leppard, Toto, Jeff Lynne and countless others. After great success in the European and Far East markets, in 2011 Frontiers partnered for distribution in North America with EMI/Universal and opened an office in NYC, thus becoming one of the global leading independent record labels for Classic, Melodic and Hard Rock music. Visit their website www.frontiers.it for more info.

For updated album and touring information visit, redrocker.com, and follow 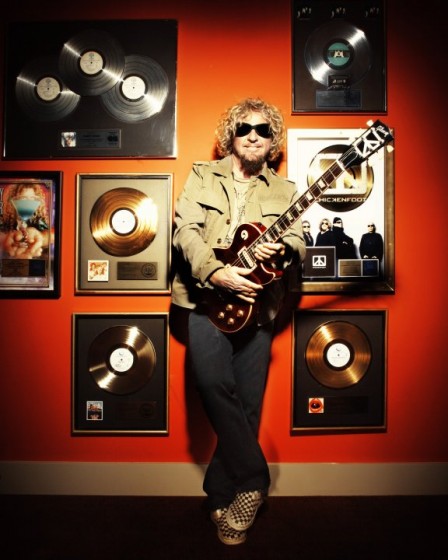