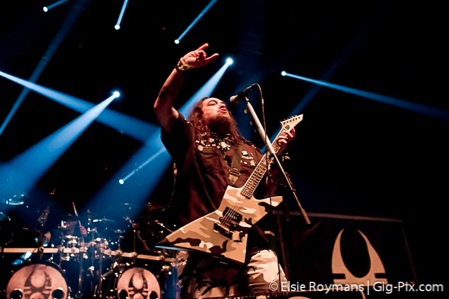 SOULFLY are pleased to announce that they have inked a deal with Nuclear Blast Entertainment, a new division of Nuclear Blast formed by Nuclear Blast owner Markus Staiger and former Roadrunner A&R chief Monte Conner.

SOULFLY will enter the studio this month to begin recording their as-of-yet-untitled ninth studio album. The record will be produced by the world-renowned Terry Date, who is known for his work with such bands PANTERA, DEFTONES and SOUNDGARDEN among many others.

“I’m really excited to be signing SOULFLY to Nuclear Blast Records,” commented legendary frontman Max Cavalera (SEPULTURA, CAVALERA CONSPIRACY). “On top of it, we’re going to be reunited with Monte Conner who I’ve worked with for over 20 years at Roadrunner. SOULFLY ‘s new album is going to be recorded in Seattle with the great producer Terry Date, and it’s going to come out later in the year through Nuclear Blast worldwide. Keep it metal!”

“It feels so right to be reunited with Max Cavalera,” added Monte Conner. “He is the second artist I signed and we’ve made 17 albums together over the years, including several metal classics. Max’s voice remains just as unique and powerful as the day I met him and I felt the last SOULFLY album Enslaved was his strongest work since the band’s Gold-selling debut. I am honored to call him a friend and to continue to be a part of his mission.”

Ever since the band’s gold-certified debut in 1998, SOULFLY have become deadlier and more dangerous with each critically acclaimed successive release, and their upcoming album will be no exception. Expect a release tentatively in the Fall of this year.

The band recently released a short trailer in which Max updates the SOULFLY tribe. Watch it here: http://youtu.be/3Qwc-miXNhI