THE BLACKOUT – a Gennaio il nuovo album “Start the Party”

The Olympics have finished, the sun has disappeared behind grey clouds, the days are getting shorter and the country is in the midst of an economic disaster. Yawn!

What we all really need is a well-meaning slap in the face – a boost to the system, a kick up the backside and a blast of positive energy to get us through, over and above these grim times.

Luckily for all, The Blackout have just the remedy in the form of their new album Start The Party!

“Music can be a great form of escapism and we tried to fully encapsulate that with this record,” says vocalist Gavin Butler. “There’s a lot of bands out there at the moment that do deal with this depression and the shit state of the world, but that’s just not us. We wanted to write about enjoying yourself and not worrying about things. Take a half hour out of your life, switch off and hear something fun!”

Originally formed in South Wales in 2003, The Blackout have gone on to shift 56,000 copies of their three full-length albums, sold-out tours across the country (including not one – but two – stints on the prestigious Kerrang! Tour Sponsored By Relentless Energy Drink) and have shared stage space with everyone from My Chemical Romance to Linkin Park, Limp Bizkit, All Time Low and Lostprophets.

Their followers – including the dedicated fan club the Riot Squad – have grown year on year, seeing The Blackout’s online presence now reaching to well over 100,000 people and racking up over one million video plays. Their last album – 2011’s Hope (charting at 27) – was indeed partly funded by their fans through the Pledge system – and now after 12 months in the making, the six rowdy Welsh rockers have their fourth opus ready to roll!

Recorded in the heart of the West Country at The Distillery Studios with former-A vocalist and long-time collaborator Jason Perry behind the desk, Start The Party sees Sean, Gavin, Matthew, Bob, Rhys and Snoz embracing everything that they – and their fans – love the most.

“There was always elements of ‘Blackout records that were about embracing the good times,” says Gavin, “and we realised that that’s where our strength lies. We wanted to go back to a time where we were purely enjoying ourselves and hoped it would come across in the music.”

“It’s about positivity, moving on and getting on with life,” says co-vocalist Sean Smith. “We originally wanted to call it ‘Everything’s fucked, let’s dance’ or ‘Everything fucked, let’s have a laugh’ but we were over-ruled…”

From the party-heavy title-track, through the hip-shaking ‘We Live On’ and the lighter-waving ballad of ‘You’ the band have created a wealth of hooks and catchy melodies that will send crowds around the planet hoarse from excitement. Once they’re delivered by their duelling vocalists, these songs will further cement The Blackout‘s position as one of the most entertaining and enigmatic live bands in the UK. Plus, the success of Sean’s own online TV series Sean Smith Sucks has proven outright that there’s something strangely alluring about about a load of Welshman with crazy hair and colourful trainers…

“This album captures our real personality,” says Sean. “That laryiness, the yobbish, laddish, loud, shouting happy gang that’s all about doing what we want and having a good time. We’re like the Beastie Boys meets Andrew W.K. meets Dirty Sanchez.”

Musically, Start The Party could be the record to see them join the likes of Biffy Clyro, Paramore and Muse – taking underground rock onto the nation’s playlists and into stadiums. With wailing guitar solos, foot-stomping breakdowns, gang vocals and more hooks than a curtain factory, it’s an album of pure driving pop-rock heaven.

“All I know is that this record contains the best songs we’ve ever written,” says Gavin. “We can only hope that it’s the one that gets us our own Caribbean islands… ”

“I genuinely believe it’s the best thing we have ever done,” adds Sean. “I listened back to it the other day, and when it finished I felt sad. Honestly, it made me wish I wasn’t in this band so I could go see us play these songs for myself! To be fair, if you don’t like this album, you’re a dick.”

Adding to their explosive live performances, their party-hard attitude, perpetual witty banter and award-winning good looks (we made that last bit up), Start The Party proves – as a bold and non-nonsense fact – that The Blackout “are still the best in town!

5) Take Away The Misery 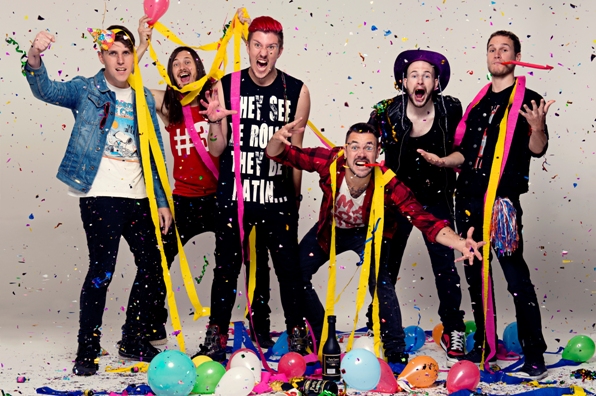