The Female Metal Valkyrie Veronica Freeman and her band Benedictum have been busy working during the past few months. A new Benedictum album is in the works and will be a complete return to a traditional but powerful feel – much like the band’s first 2 albums. Working with the band on the production is Grammy Award Nominee and Billboard charting producer, John Herrera and of course Jeff Pilson (Dokken, Foreigner). Jeff has already had one writing session with Benedictum and Veronica has just returned from her second writing session with Jeff Pilson this past week.  Craig Goldy (Dio) has been writing with Benedictum as well and there will probably be some vocal duet surprises on the album too. The songwriting team of Pete Wells and Veronica Freeman is however still in full effect and with Rikard Stjernquist (Jag Panzer) adding to the mix there are some powerful great ideas coming to life. 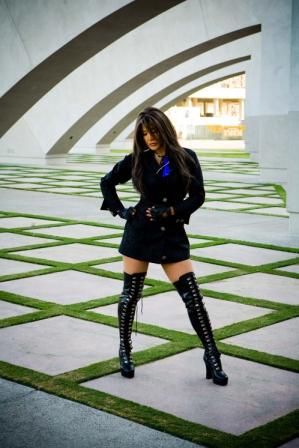 But Veronica is also working to show another side of herself.  In Veronica’s words: “I had a lot of input and encouragement from Frontiers in the previous months to try and stretch myself with different musical styles and approaches. So I have decided to accept their proposal for a solo album – which will be released under the moniker of” THE V“. Musically Veronica will be pursuing a much more melodic and hook-friendly direction. John Herrera will also produce this endeavor and there should be some special guests appearing in the writing and performing dept including a song from Jerry Dixon from Warrant and some bass performances from Brad Lang from Y&T as well as from Jeff Pilson and others to round out the talent that will be involved with this project. Pete Wells will also show his other side with some of the music he is contributing to this project.

Both new albums will be released in 2013 – Benedictum are really looking forward to also being able to perform in Europe in 2013 so lookout for Veronica’s talents both in Benedictum and with the V sometime soon! We all really hope you will enjoy all the music that is coming your way!