“A COSMIC TRAIL is an all instrumental Progressive Metal band from Germany, and you might as well add them to the long list of amazing bands from this country. When you hear the phrase “Instrumental Progressive Metal” you probably think of Liquid Tension Experiment mainly because they are probably the most renown instrumental Metal band and rightfully so for they are extremely talented. That being said I would not compare “II: Mistral” to anything LIQUID TENTION EXPERIMENT has created. This album holds a very relaxed and calm atmosphere where LTE is more on edge and energetic type of music. Let it be known that just because this album is a bit more relaxed does not mean it’s boring for it held my attention from start to finish. This album has sections that are very laid back and remind me of classic 70s Progressive Metal. The track “Thwart Progress” is a prime example of this; the first half of the song is a little bit more upbeat and technical but the second half is very easy going and atmospheric. It just goes to show the variety these talented musicians showcase. The overall drumming was very good but the sound quality suffered. The drums just sounded very cheap and thin and personally I prefer a meatier percussion sound. The bass was audible, and quite good, if you were to wear a decent set of headphones. In fact I recommend that you experience this entire album through a nice pair of head phones.
“II: Mistral” is a very robust sounding album that takes your ears on a sonic journey you won’t soon forget. This record’s large sound is mainly due to the keyboards and bass. The bass creates a solid foundation while the keyboard acts as a support for the rest of the music to hang upon. Now this is not in any way a keyboard driven album but if the keys were exempt there would be a large noticeable change. The guitar work is quite imaginative just like the rest of the instruments on this album. In a way the guitar acts as the vocal part of the album speaking in musical tongues, conveying emotion and feeling with each note. The riffs on this album seem a bit watered down but the solo and harmony work definitely makes up for that. The guitar style puts me in mind of PINK FLOYD but with his own metal flavor added to it.

A COSMIC TRAIL has certainly created one of the better albums in the first half of 2013. “II: Mistral” goes by way too quickly when I listen to it and that just causes me to put it on over and over again. Definitely check out A COSMIC TRAIL’s “II: Mistral”.“

A COSMIC TRAIL promo trailer for the new album “II:Mistral” 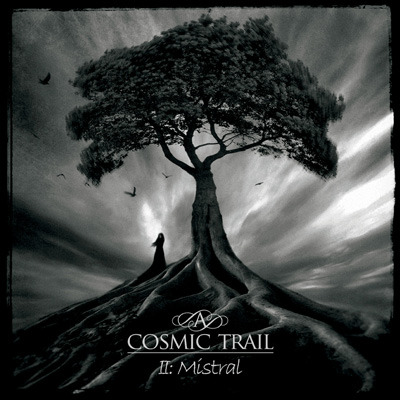