BILLION DOLLAR BABIES are very popular in Sweden because of their explosive and intoxicating live shows. After one tour in Germany in 2011 they are back and will start with their new tour in August 2013.

Their new album “House of Dreams Pt. 1” is harder and more compact. It is full of killer-riffs, monster-grooves and solid melody-lines. With their dazzling live shows, front man Frankie Rich and the other band members will make you forget any other bands of this genre.

BILLION DOLLAR BABIES was founded in Borlänge/Sweden (where bands like SABATON and MANDODIAO were active), and the founding members were inspired by bands like KISS. They created a sound which is a mixture of MONSTER MAGNET and MÖTLEY CRÜE – “directed by Quentin Tarantino” as the band likes to point out. With energy, charisma and attitude this band also rocks live festivals, like the Sweden Rock.

Their motto is “We fuck your girlfriend” and, at the end of August, they will show you who’s really in charge. The band promises: “Expect a great live show with lots of effects and gimmicks.” 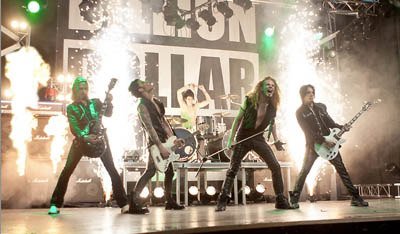