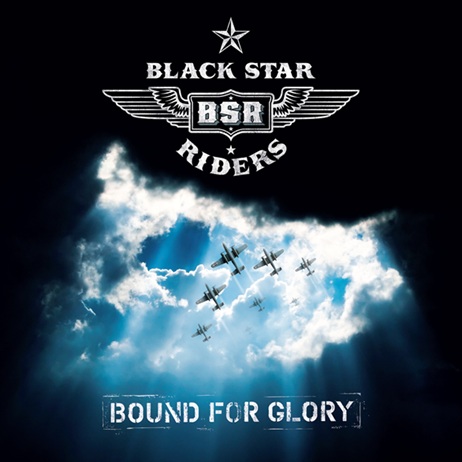 BLACK STAR RIDERS, the new band featuring THIN LIZZY members Ricky Warwick, Damon Johnson, Scott Gorham and Marco Mendoza together with drummer Jimmy DeGrasso (Alice Cooper, Megadeth), have announced All Hell Breaks Loose as the title of their debut album on Nuclear Blast Entertainment, which will be released in Europe on the 24th May 2013.

The album will be preceded by a first single “Bound For Glory”.

Set for release on Friday 22nd March 2013, the single will get its first public airing on Ken Bruce’s Radio 2 radio show on Thursday 21st March 2013. The german premiere will happen on German “Rockantenne” radio station between 3.00 – 4.00 pm same day.

About the single, BLACK STAR RIDERS frontman Ricky Warwick states: “Bound For Glory – a song for the lost but never lonely, walking tall in the face of everyday adversary, everyone has a story to tell, revolution begins in the mirror!!!”. Guitarist Scott Gorham adds: “When it came time to pick one of these songs as a single, we had a really hard time. There are so many really great tracks here and everyone had their favourites. But in the end, we all agreed that Bound for Glory is the perfect choice and represents what Black Star Riders is all about.”

About the origin of the album title, Ricky goes on to say:

“I was watching a documentary about World War II bombers and saw the name painted on the side of one of the aircraft. The name just resonated with me and it seem to encapsulate the turmoil that we, as a society, are currently experiencing. The past few years have been such a wild ride and now with the release of the album, it sounded like a bad-ass album title that summed up what BLACK STAR RIDERS is all about.”

The single and album were produced & mixed by the legendary Kevin Shirley (Led Zeppelin, Iron Maiden, Aerosmith, Rush).
The album will be released as a standard CD and also as a special edition digi-pak featuring a bonus track “Right To Be Wrong” and a “Making of” DVD.