For many years, the members of BLIND GUARDIAN talk about it – finally lead singer Hansi Kürsch gives a certain update about it: the orchestral CD! Hansi published the following news on their homepage:

…first a late, but still fresh, Happy New Year to everyone. After getting rid of some bonus pounds gained over the last few months due to live abstinence we are now getting ready for a very busy and exciting year of creativity and efficiency. Wishful thinking, you think? Blasphemy, I would reply! As most of you may have recognized, we have been busy all during 2012 with some additional touring activity and some extra missions, such as the completion of A Traveler’s Guide to Space and Time, which is a great legacy. It features all of our material from the Virgin era in a new and accurate framework, beautifully designed by Felipe Machado. The whole box offers a great insight about that particular part of our career. Even though it took us more time than expected, we are really pleased with the final result. It’s something we are really proud of and something which you hopefully are going to enjoy as much as we do. I just got my sample yesterday, and am really blown away.

This, of course, has not been the only thing we were doing during the last year. For the sake of fun and leisure we were working on new stuff and progressed far quicker than we would have expected. Not that this means a lot in the generous production time frame of Blind Guardian. But it might secure a late 2014 release for at least one BG album. As you may have read in interviews we are intending to bring a long story to a well deserved and hopefully happy end. As already announced with A Twist in the Myth and also with At the Edge of Time, apart from a regular album there finally will also be the release of the orchestral album. Why am I so sure about not being wrong again this time? I have no idea. Nothing new here, one could say.

The difference might be that throughout the last 18 months we have recorded 7 songs in Prague. There probably is a handful of additional songs to record during this year, but they are also already finalized with regard to composition. In theory we do not need any further songs for this album but ideas simply seem to flow endlessly… The reason why this album is still far from being released is partly based on the regular album, which we definitely would like to release first. At this point in time I am in a very tricky situation. How to continue from here? I think it is probably easiest to simply continue by telling you something about the regular album since this would be next anyway. Keep in mind that “next” is relative!

Well, we have started working on four songs and already were able to finish two songs musically. The working titles are “Encrypted Time” (I think this title is inspired by André’s passion for World of Warcraft or so – I can only guess…) and “The Ocean” (here, André has been inspired by my undefined mumbling in the song). “Encrypted Time” is a modern speed metal song with some tribal aspects and some 70′s inspirations, while “The Ocean” is a very progressive (this time I talk about ELP meets Savatage art rock when I say progressive) orchestra dominated song which will give you a further glimpse of what to expect from the orchestral album. I am clueless about the right story board for “Encrypted Time” but “The Ocean” could be used as a theme opener for the orchestral project. We will see… The other four songs seem to turn out very special and obviously very different. Working titles: “The Irish Hill”, “Prophecies”, “Soundtrack 2″ and “Midtempo Song”. I cannot tell you exactly about how many times we have had a song over the years which was first called “Midtempo Song”. I am pretty sure we are not the only band abusing this spectacular title over and over again. Thank God, the title is not copyright protected, yet. We would be in trouble then. Maybe it is and that’s the reason why it barely ever ended up as a title on the album.

Out of those tracks “Prophecies” is the one which is developed the most. It is almost straight forward, has a very strong pre and main chorus and offers some “Queensrÿchish” prog (this time I do mean Queensrÿche when I say prog) elements in combination with some Blind Guardian fantasy metal. A nice one. I’ll keep it short from here: “Irish Hills” might be a surprise with some Irish melodies, which none would expect in a song with such a name… “Midtempo Song” is a great song of misunderstandings and technical failures, the result so far is a little surprising to everyone involved and has nothing to do at all with a song entitled “Midtempo Song”. I enjoy this one a lot, because I cannot remember us doing something like this. The song is still in a very early phase and André has kept it hidden from me for a while now. “Soundtrack 2″ has been the first song fragment for the new album. We had put that aside for a while, but it contains some very heavy elements, almost thrash metal like. Let’s see how this is going to end up. You see, there is a lot in the pipeline already. But there certainly will be more new stuff during the year. Even though we have already started to record some drums for the album at the end of the last year, the whole thing is going to keep us busy until the spring/summer of 2014 for sure.

Going to Prague to see how the orchestra songs come alive is a very special and intense moment for us. Thanks to “Sacred Worlds” and “Wheel of Time” I can say that we have learnt a lot about scoring, recording and mixing when it comes to such music. You will notice a great improvement when you listen to the final result of this adventurous trip we have started so long ago. Last week some of us went there again to record “The Ocean” , a pure orchestral song called “Misty Mountain” and some more stuff. We once again had to realize how ambitious this whole project is and how time demanding! Luckily, everyone who is involved has understood, that there will be no compromises. We would never accept “second best” or “we fix it in the mix” here. This means that even though we can see the end of the road here, it still is a long and winding one and will demand our full concentration for the next 12 to 18 months. Charlie (Bauerfiend) and I already did some demo recordings for four of the earlier recorded orchestra songs sometime last year. We all consider this session and its result a very promising experience. Now I am ready to start proper album recordings for this one. I will do my best to finish most of the vocals during the year. This seems a very ambitious goal but is not impossible. I say that in the first days of January… Apart from the music and the concept we will also work on some additional surprises. Keep yourself prepared. One thing is for sure there will be nothing comparable to this on the market. It’s not a typical soundtrack, a typical musical, nor it is a rock opera. It is typical Blind Guardian – more or less without band. At that point, I would say this is going to stay unique until we will release part 2. The good thing: we already have some material for it and another 15-17 years before it has to be released. Chinese Democracy was yesterday. 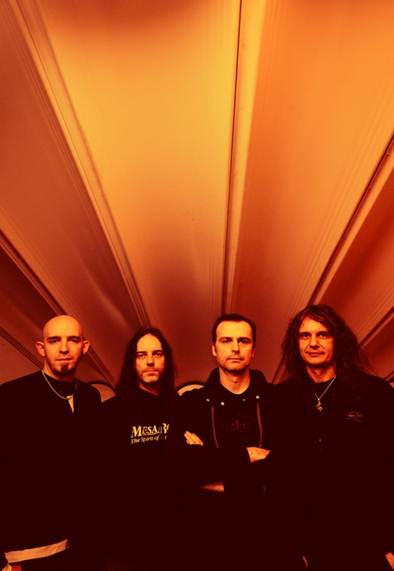