Don’t miss the new single “Saint Patrick’s Day” from Civil War
The second single from Civil War’s “The Killer Angels” album is here and we can’t wait to share it with you!

The song is called “Saint Patrick’s day” and is a song about the missionary Patrick who is the primary patron saint of Ireland and the lyrics is simply about his life and his legacy.
The album will hit the world on June 11 on Despotz Records and will be Civil War’s first full length album. The album is recorded at Studio Myhrer (the bed and livingroom of keyboard player Myhr), drums in legendary studio The Abyss/Black Lounge by Jonas Kjellgren. Artwork is done by the polish artwork artist Lukasz Jaszak.Don’t forget to pre order your own copy of the very special limited edition of the album:
http://despotz.bigcartel.com/ 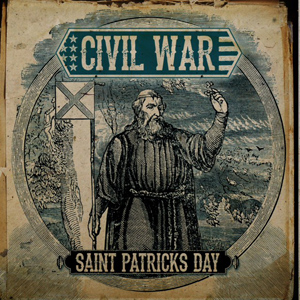