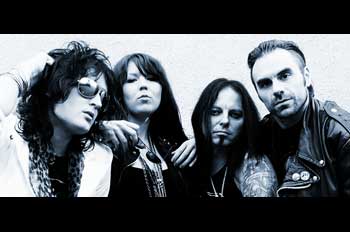 VANITY BLVD (pronounced: boulevard) was formed in the city of Avesta in 2005 and took the sleaze scene by storm with two selfproduced EP’s of dirty hardrock with the energetic and charismatic frontwoman Anna Savage behind the microphone.
The debut full-length, “Rock ‘n’ Roll Overdose”, from 2008 was produced by Chris Laney who has worked with bands such as EUROPE, CANDLEMASS and CRASHDIET. The single from the album, “Share My Pain”, received plenty of airplay at various Swedish radiostations.

VANITY BLVD have now signed with Austrian based Noisehead Records and will record & mix their second full-length “Wicked Temptation” at Deep Blue Studios with producer Nicko Di Marion (STEELWING) during May 2013. The album will be mastered at Black Lounge Studios by Jonas Kjellgren (Sabaton, Hypocrisy, Overkill) and released during the summer/fall (release date TBA).