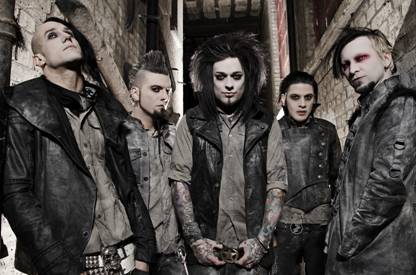 Having recently inked a worldwide deal with Nuclear Blast Entertainment, THE DEFILED can now reveal the artwork for their forthcoming album »Daggers« – to be released on August 2.

The artwork was designed and executed by Scott Chalmers, the band’s long time photographer.

Keyboardist The AvD explains the concept: “Daggers were made for only one thing – killing or betraying your fellow man. And one stab is almost always never enough…The flowers symbolize goodwill with the prospect of a co-operative future. The dagger behind the back symbolizes the ulterior motives, the insincerity and the impending disappointment that surrounds us all. This theme runs through all the tracks on the album. The concept was born out of a scene we wanted in our new video for `Unspoken’. We wanted the two main characters shaking hands with daggers behind their backs. We were originally going to call the track `Daggers’ but then opted to go for `Unspoken’. The song is about the politics of life and it seemed more fitting. We also didn’t want to limit the word “Daggers” to only one song on the album, as it is the overall feeling we wanted for the full project.”

»Daggers« is THE DEFILED’s second studio album and debut release on Nuclear Blast Entertainment. It follows the debut »Grave Times« (2011) which secured the band’s status as one of the UK’s most successful unsigned metal acts.

Moreover, the band has uploaded a short teaser for the forthcoming `Unspoken´ video clip to YouTube – check it out here: http://youtu.be/FWa975o7SLo
The official video clip is to be released on June 3.