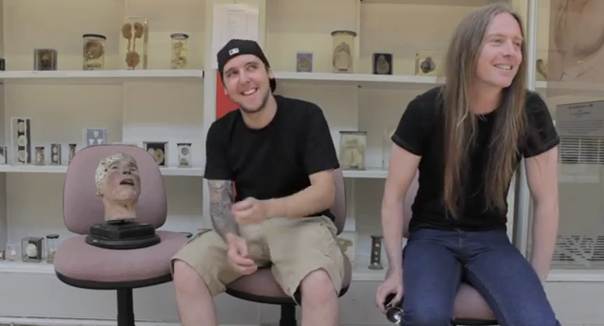 Resurrected and rejuvenated British Death Metal maestro CARCASS has made their second track-by-track video available, which breaks down the songs from their upcoming album »Surgical Steel«. Watch guitarist Bill Steer and drummer Dan Wilding dissect the songwriting process for ‘The Master Butcher’s Apron’, ‘Noncompliance to ASTM F 899-12 Standard’, ‘The Granulating Dark Satanic Mills’ here http://youtu.be/nLFFvsT9xAc. »Surgical Steel« will be released on September 16 (UK), September 13 (Rest of Europe) and September 17 (North America). The impatiently awaited sixth full-length album by CARCASS, will be made available on several collectible formats and can now be ordered here http://smarturl.it/SurgicalSteelCD.

The track ‘Unfit for Human Consumption’ was recently debuted here http://goo.gl/VyH8V0 via TheGauntlet.com.

Check out this trailer previewing music from »Surgical Steel«. You can also stream and download the brand new track ‘Captive Bolt Pistol’ at the following location: http://smarturl.it/captiveboltpistol. A lyric video for the same song may also be viewed here http://goo.gl/XJcNs4.

»Surgical Steel«, the band’s first studio release since their 1996 LP »Swansong«, was produced by Colin Richardson (NAPALM DEATH, BOLT THROWER, GOREFEST, CANNIBALCORPSE, SINISTER, RODRIGO Y GABRIELA) and mixed/mastered by Andy Sneap (MEGADETH, ACCEPT, EXODUS, TESTAMENT). “We went back to working with Ian Tilton, who is an iconic English photographer famous for working with THE STONE ROSES,” stated frontman Jeff Walker regarding the cover artwork. “He actually did the front cover for »Necroticism«… as well. We’ve deliberately tried to evoke the feeling of that album and »Heartwork«.” Joining guitarist Bill Steer and bassist/vocalist Jeff Walker in the band’s current incarnation are new drummer Dan Wilding (ABORTED, TRIGGER THE BLOODSHED) and guitarist Ben Ash (PIG IRON, DESOLATION, LIQUEFIED SKELETON). Expect some guest vocals from original sticksman Ken Owen as well, when »Surgical Steel« is finally released this Fall.

CARCASS has released several classic albums over the years, including Decibel Magazine “Hall of Fame” inductees »Heartwork« and »Necroticism – Descanting the Insalubrious«, and their influence has changed the face of Extreme Metal with every consecutive release. Whether it was inventing Gore-Grind (i.e. »Reek of Putrefaction«, »Symphonies of Sickness«) or creating the template for Melodic Death Metal (i.e. »Heartwork«), CARCASS has always made records by which bars were set and rules were broken. Upon the band’s dismantling in 1996, fans mourned the loss of the seminal act and longed that the group would return again one day. In 2007, the metal world got its wish as CARCASS reformed to play several sold-out reunion shows around the globe. Once again re-motivated to administer a shot of cynicism and infectious riffs into the arm of a sickly Metal Scene, founding members Bill Steer and Jeff Walker began writing what would become the latest output of their highly influential career, »Surgical Steel«. Only the choicest of cuts were made, and blood sweat and tears were shed to bring us a record worthy of the CARCASS legacy. In short, »Surgical Steel« is just what the doctor ordered.